There is a joke that you can tell who the pilot at a gathering is because he’ll either tell you or he’ll look up at every single passing aircraft. I’m in the latter category. I don’t tell random people I’m learning to fly because the follow up questions usually relate to how much it costs followed by how many hours I have and then I have to explain why I don’t yet have my PPL despite having almost 60 hours in my logbook.

But I am the guy who looks skyward at even the merest hint of a passing aircraft. I’ve done this for as long as I can remember but it seems more significant now because I’ve hit a bit of a speed bump in my training. It’s a twofold problem – firstly the NAVEX work needs longer sessions and secondly we’ve been cursed blessed with a LOT of afternoon thundershowers in what would normally be the end of summer. These have been accompanied by quite a lot of atmospheric moisture which has resulted in poor visibility in the mornings too! Of course, NAVEX work is closer to what I’d be doing with my PPL – so this is the reality of summer flying on the high plateau of South Africa. It’s still frustrating…

Back to the looking skyward. We’re on vacation in the Eastern Cape, in a little town/hamlet called Kasouga. It lies slap bang in the middle of the Port Alfred General Flying Area, FAD192. Ordinarily one would expect that the GF of a small country town would be quieter than a troupe of mimes, but not this one. There is a constant stream of Cherokee’s from the local flying school which is a residential cadet-to-airline school. The thing that I find curious is that we are 5nm from the airfield which essentially lies in the middle of the GF, yet the vast majority of the aircraft are flying straight over and don’t appear to be doing manoeuvres at all. At Lanseria we’re in the midst of manoeuvres the moment we enter the GFA – but I guess it IS 10nm from the airfield. It’s entirely possible that the Cherokee 140’s they’re using are simply too anemic to be at safe manoeuvring height by the time they get to us. It is sea level but it’s warm and some of the horses may have escaped from those engines by this stage. Still, it is quite fun to listen to the engine note and predict without looking what they’re doing – this afternoon I heard one throttle up as he turned and I thought to myself, yep, steep turns – and it was. Fancy as our Cirrus 20’s are, I’d still rather be doing steep turns in a wheezy 140 than on the ground.

Occasionally there are more interesting aircraft to gaze at – yesterday a C-130 was circling off the coast – there is something really stately about a C-130 riding those characteristic Allison exhaust plumes. Sometimes we’re really lucky and some of the guys at Port Alfred fly their classic aircraft up and down the coast – we usually see a Tiger Moth and there is a Stearman at the field too which I’ve seen once or twice through the years. I’m told there is an L-39 based at FAPA too so hoping to catch a glimpse of that at some point.

Although, to be honest, the view on the ground isn’t half bad either! There is something special about this coastline – miles of unspoilt beaches mercifully unsullied by legions of visitors (we have probably the only vehicle in the village with upcountry plates). The kids love the beaches and lagoons and even our 12 going on 17y old son is able to lose his teenage angst in the sea and building sandcastles with his sister. 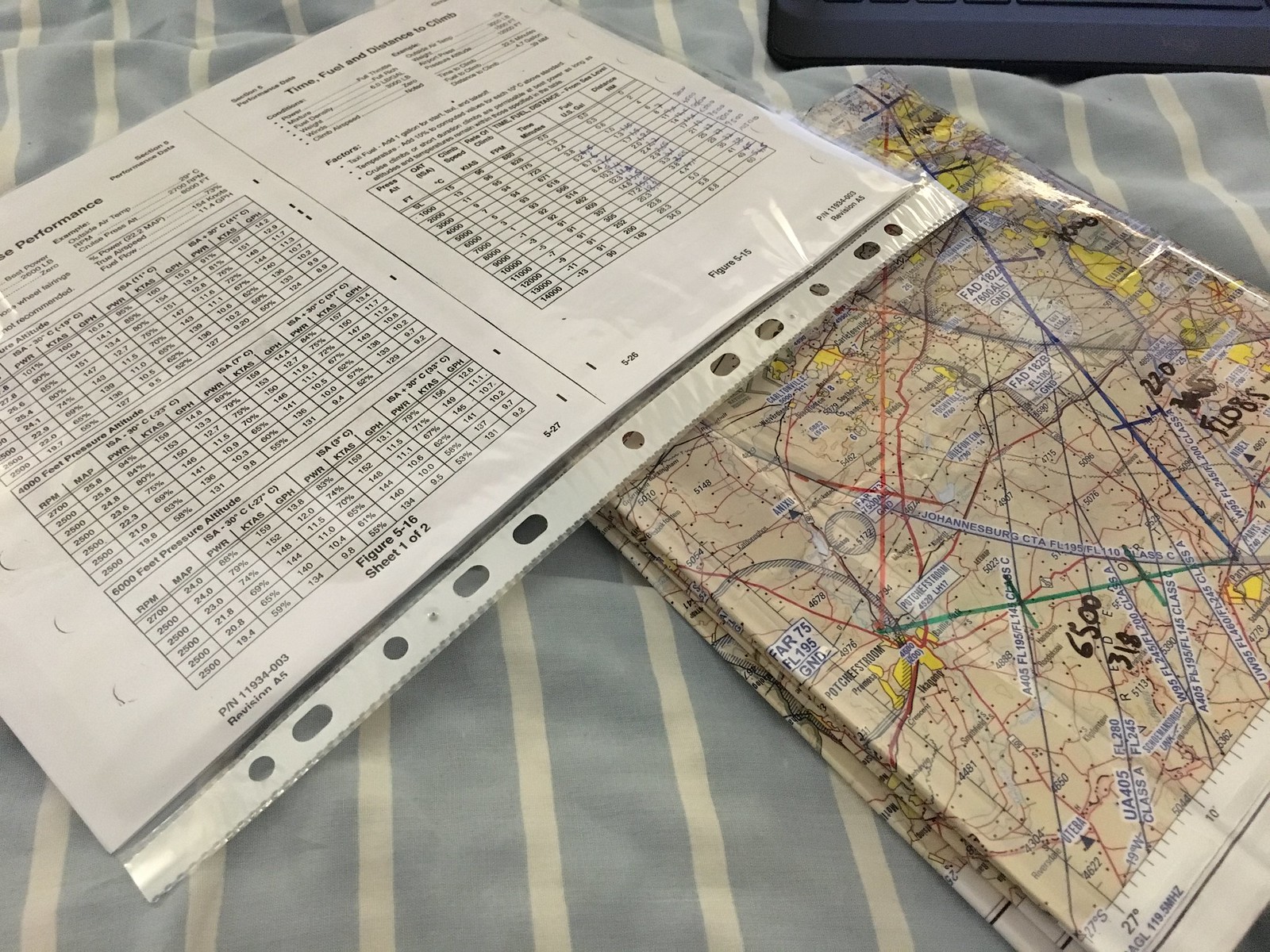 In 10 days I’ll hopefully be back in the big smoke, rested and raring to go. I’ve got a cross country booked in my favourite G3 SR20 (ZS-CCT) on the day after we return – route is all plotted and planned and all I need to enter are the winds aloft from the forecast the evening before and hopefully the weather will play along.

We usually hit the coast for 2 weeks at this time of year and every year we comment on how winter arrived while we were away when we return. Winter for us is actually the best flying time – reasonably stable air, lower temperatures giving us more reasonable DA and most importantly… no Cb’s to look out for.

All thing being equal I should get this Nav done, then a dual check Nav and then I’ll be onto Solo Nav. I can see the end! It’s funny because I always said it didn’t matter how long it took because I’d still be flying – but it will be great to get that brown book that says PPL on the front.