Ongoing maintenance issues with the flying school aircraft mean I’m grounded for the moment. Fortunately my flying buddy Ari came to the rescue this weekend. He owns an SR22T and was kind enough to let me tag along on his flight on Saturday.

Saturday dawned CAVOK at my house but wouldn’t you know it, was Marginal VFR by the time we had refuelled. Plan was to fly to Rustenburg(FARG), land, swap pilots and then head back. Fortunately we were able to depart VFR. I can report that the SR22 (G5)is very comfortable in the back. Sadly I was forced to use the Bose A20 ANR headset which was laid on. (Life is really tough..) Sheesh. They make a HUGE difference.

It is very different in the back. It’s great to be able to observe the procedures and flows from a non flying perspective. Ari is very methodical and correct – nice to see and confidence inspiring. They use the full checklist on the Perspective avionic system – usual procedure for the flight school is to do everything from memory and then run the pre-takeoff checklist prior to calling “ready in the bay”. I think I may well revert to using the full checklist in future – sealing up those potential Swiss cheese holes.

I’m always impressed by the performance of the SR22T compared with the SR20. Of course this is obvious at the elevated field where our 20’s are probably well short of rated 200hp whereas the turbo is still doing 310hp. It makes a big difference. As we climbed through the fog layer which was about 200ft thick the visibility improved greatly and we cruised out toward Rustenburg between the layers. Technically VMC but I wouldn’t have been happy flying on a solo nav in these conditions. Some (very impressive) slow flying followed – to hold the plane at 69kts for 5min is no mean feat – at 68 the stall warning goes…

We landed at Rustenburg (FARG) where they seemed quite excited to have us – they were obviously having some kind of event – but we were landing, changing pilots and leaving again – after we’d back taxiied along the runway stopping to remove dead birds along the way. Quite strangely these didn’t seem to be due to aircraft strikes as the carcasses all seemed reasonably intact.

At Lanseria our fears of deteriorating visibility had come to fruition. “Alpha Romeo India, the field is IMC, please state your intentions…” A large bank of low cloud/fog had settled over the base and final sector.. Now this is where having a little bit of savvy helps. The controller is not allowed to offer Special VFR but you can ask for it. Which we did. Special VFR allows one to enter the TMA under visual flight rules when the field is IMC as a result of poor visibility, provided you remain clear of cloud and with the ground in sight at all times. Which we did and in no time we were stuffing the aeroplane back into the hangar (which does involve moving another plane out of the way first)

A great morning’s flying coming out of what looked like a very marginal day. As they say, the hardest part is coming to the airport and NOT flying. It’s much better when you can actually fly. No hours for the logbook this week but a great experience 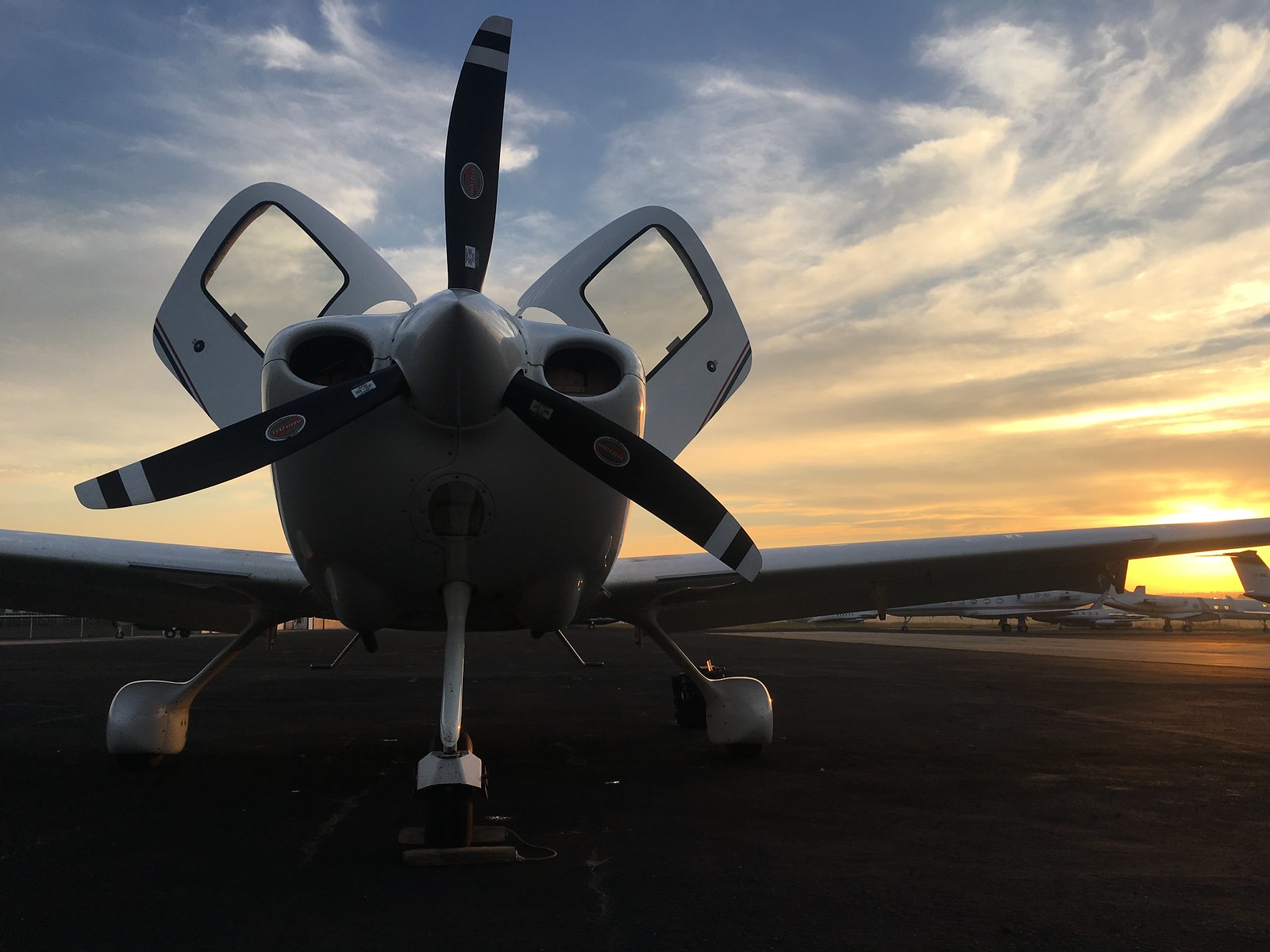 Back in the Saddle
We’ve just come back from 17 nights away. It was great. Apart from the whole “not flying” thing. So I was a little apprehensive about this flight. I don’t think I’m at the “it’s like riding a bicycle” stage. I made sure to get to the field early – I find it focuses me if I give myself a good hour to get the plane preflighted, cameras set up, controls cleaned (yes – I’m that guy who wipes down the controls before flying) and into the correct headspace for flying.

To be honest, I almost cancelled the flight due to tiredness. We spent two days driving home, didn’t sleep well on the overnight and had an iffy night before this flight – but I felt I was ok to fly with an instructor. I wouldn’t have flown solo though. Bad call? I’m not sure – I did think about it a lot.As it turned out, it was good to be early. The plane had been left in a bit of a mess which always annoys me (some people treat hire and fly like rental cars), and there was a snag with the plane. One of the lower engine cowling screws was missing. On the Cirrus these are spring loaded screws. And this one was missing. Now, I’m unclear as to how they can come loose unless they’re loose before flight. So whoever preflighted the plane last didn’t check the screws. I wasn’t prepared to fly the plane with a missing cowling screw but fortunately we were able to cannibalise one of the flight school aircraft having an MPI for the screw and we were able to head out. 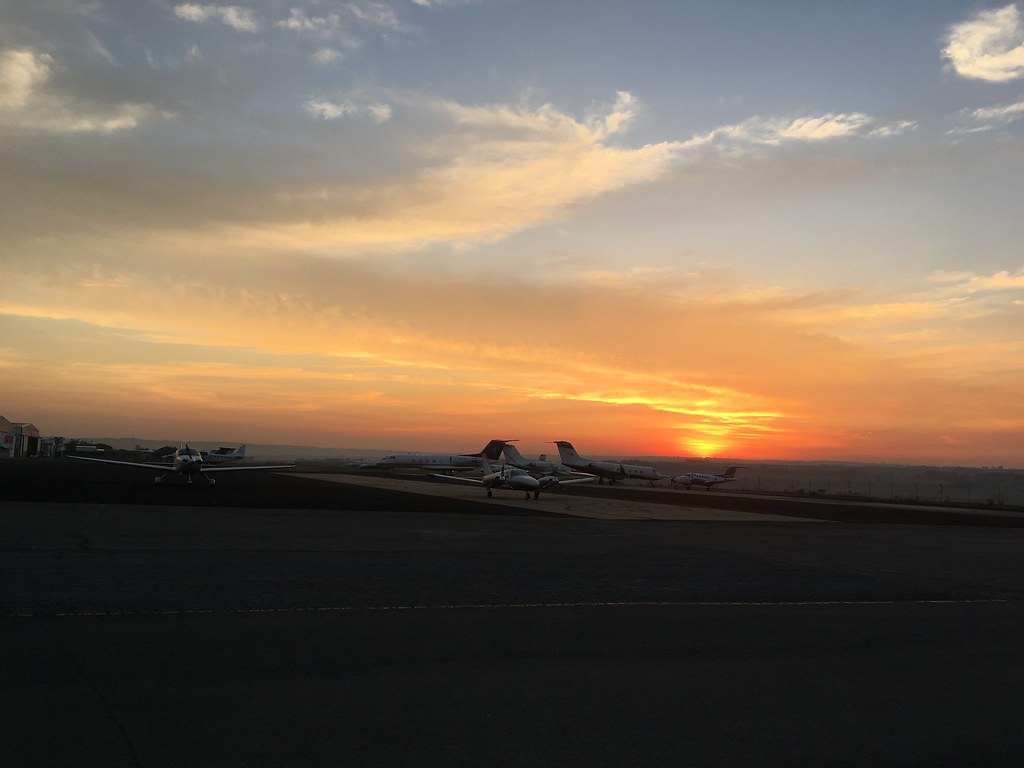 Sunrise over the freight apron

Amazingly… I can still fly. Being away for ages and thinking a lot about the little things about flying seems to have helped. I wanted to concentrate on getting decent airspeed before climbing (I tend to pitch early after liftoff leading to airspeed hovering around flap retraction speed) and secondly, getting trimming the plane right. Why such emphasis on trimming? I know this is a core skill but having your hand on the stick can hide a lot of trimming errors – and I discovered to my horror (jk) that I need my left hand to write on the knee board. This requires me to release the stick. And then it goes pear shaped. And I’m not going to use the autopilot simply so I can write. (OK, I should use the AP but this is as good an excuse as I can think of to improve my flying). 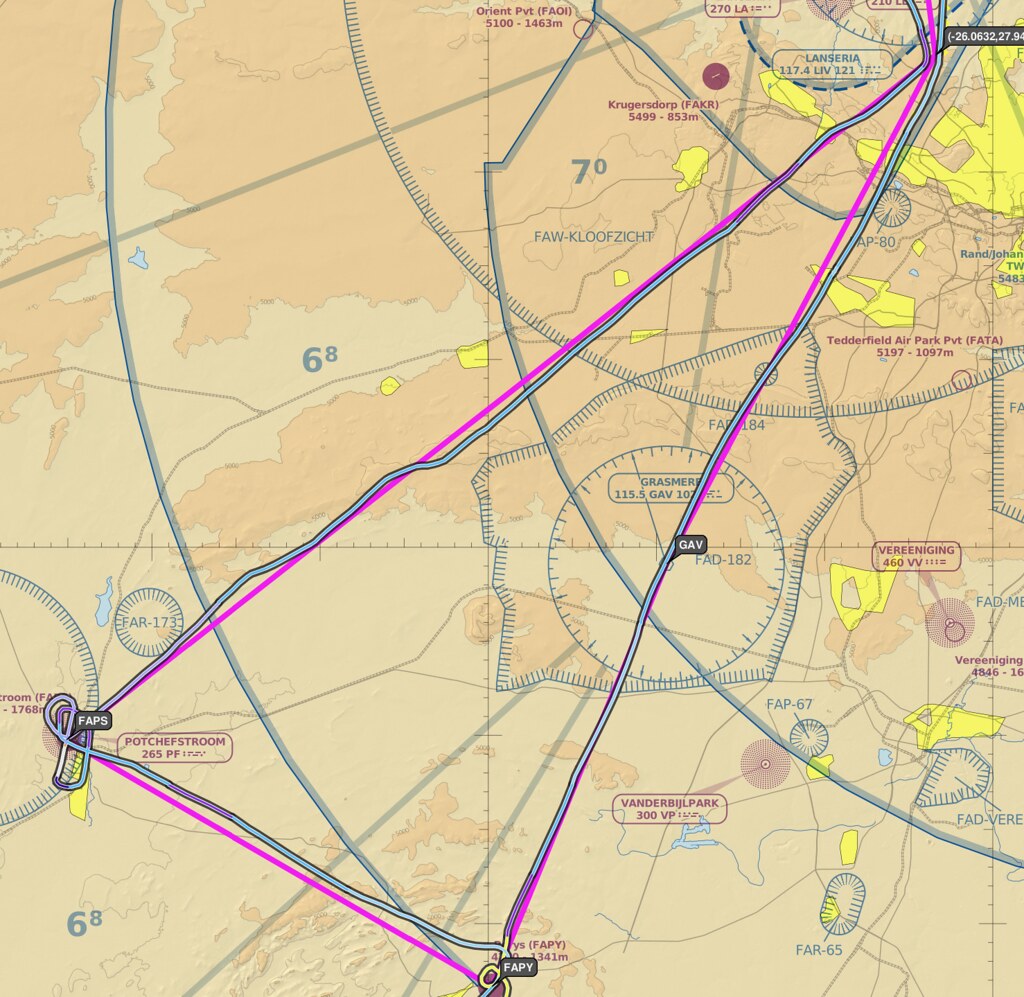 Our Route vs Plan – From Cloudahoy

Lanseria – Parys
I’d forgotten how great it is to fly in the morning. Smooth air, good vis, no pesky Cb’s. Our route took us south over the north western suburbs of Johannesburg and over sprawling Soweto heading for the Grasmere(GAV) VOR – which is allegedly easy to see being in an open field and all – but we flew directly over it and I couldn’t see it. A little bit to the left and a few miles of flying later we crossed the Vaal River which marks the boundary of Gauteng Province and the Free State Province. Our destination? Parys Airfield, which, in the past was a popular $100 hamburger/breakfast spot but of late seems to have fallen into some neglect – the runway is no longer pristine. It’s short, and this is exacerbated by the invasion of dirt and grass onto the touchdown area – I planted CTP firmly down just after the grass patch, fire walled the throttle and pulled back to keep the nosewheel light –  great short/soft field practice – we don’t have to do grass field landings for our PPL..Parys is located in a geological feature called the Vredefort Dome – which is the largest verified impact crater on the planet. It is also one of those towns that seems to become popular for the Sunday jaunt crowd – lots of antiquey places restaurants and general hipness. Pretty interesting. Also pretty challenging – as you can see from the map image above, there is high ground north and west of the field so good climb management is required.

Parys – Potchefstroom(FAPS)
This was my second attempt to get to Potchefstroom – the previous attempt resulted in a diversion back to Lanseria due to come pretty aggressive looking storms which developed rapidly.  It’s a short hop to Potch from Parys – about 25nm so we’d just got to top of climb when it was time to descend. Another shortish runway but in much better condition – we did our overhead/unmanned join (which always requires some head scratching because unlike our American friends, we don’t enter the downwind on the 45. We fly overhead 1000ft above the pattern, turn and descend on the “dead” side of the field, turn across the upwind segment and enter the downwind (obviously making sure there is no traffic on departure). The advantages of this is we don’t bomb into the circuit and are able to see the runway while descending so we know who is departing or not. The disadvantage is that it can be confusing as to which way to turn especially since there is often a non standard pattern in force. And it takes longer.

As it turns out is was academic as there was NO other traffic. At all. In fact we didn’t see any aircraft on the trip at all until we arrived back in the Lanseria TMA.

Potch – Lanseria
Long(ish) leg this. But my headings were good, the trim was coming right and we were able to enjoy just being in the air. There is not much out there. Lots of fields, a few mindumps, mineheads and a meatbombing (parachute) area. 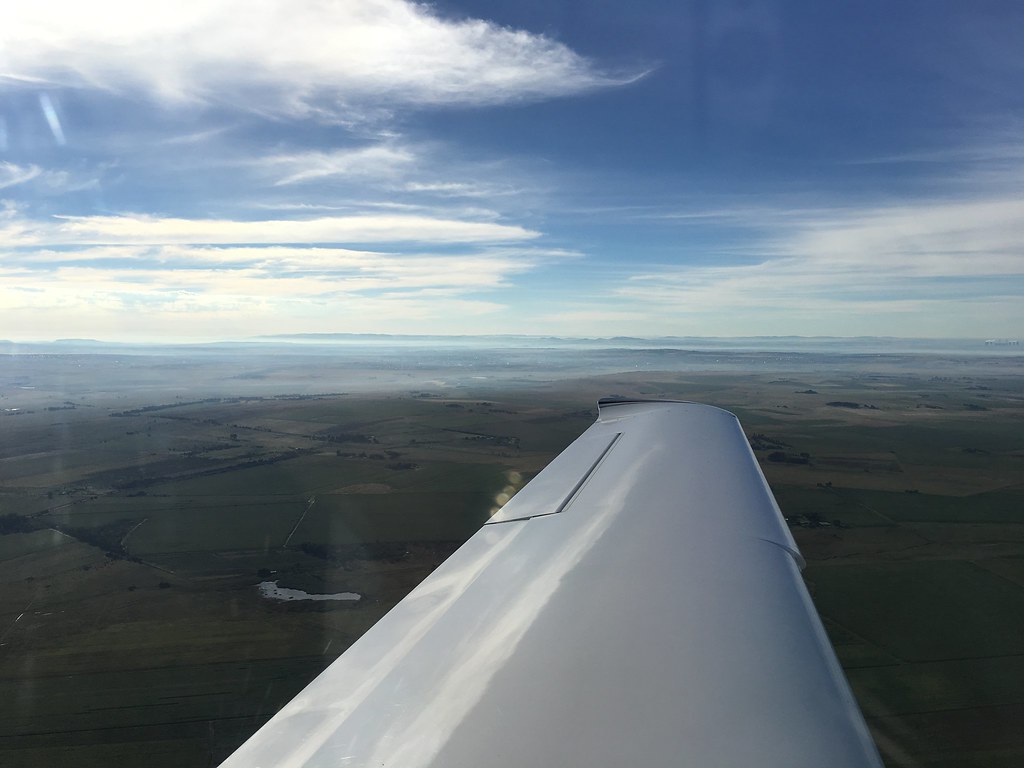 Much of nothing. Pretty nothing. But not much

Arriving into Lanseria from the west is a little fiddly. There are two TMAs to avoid – the first is the OR Tambo International Airport TMA (FAOR) which has it’s lower limit at 7600ft. I guess the TMA is equivalent to what they’d call class Bravo airspace in the US. So we had to be at 7500 well before that. The Lanseria TMA (Class B)lies under the FAOR Class B at 6500ft which means highest is 6400ft. Which leaves about 400-600ft clearance over a ridge – which feels tight.  It doesn’t help that the ridge is bristling with aerials and towers. Fortunately there is an area where the terrain is a little lower which we headed for.

Surprise……
On short finals, my instructor asked the tower for a touch and go. Eh? We were supposed to be landing. So I knew something would happen – I was waiting for the EFATO scenario. No. Glide to final from downwind? No. Flap failure? Check. OK. What was that approach speed with flaps up again? I’ll admit, the base leg was a little hot and high. The reason for this became obvious when I realised I was still flying the full flap power setting. Easily corrected and managed to put down my best flapless landing to date. Bad thing? It was on one wheel. Good thing? It wasn’t the nosewheel. I blame a slight crosswind, but the tail was never in danger.Another 1.9h in the logbook. And now I’m signed off for my first solo Nav. Excited? Most definitely. Progress. It’s a good thing.